Offences against the Person Act 1861 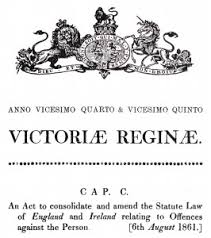 Front cover of the Act
The Offences against the Person Act 1861 was an Act of Parliament which consolidated various previous laws concerning violence and sexual offences. It was largely a revision of the Offences against the Person Act 1828. Some parts of the Act are still in force, although many of its provisions, including those relating to homosexuality, have been repealed or heavily amended by later legislation.[1]

Sections 18 and 20 of the Act deal with grievous bodily harm and section 47 with actual bodily harm. These provisions are still in force, although they have been modified by subsequent legislation. Consent is not a valid defence under the act, except where there is a good reason. Thus for instance surgery and boxing are legal, but castration would not have been legal before gender reassignment surgery became a recognised procedure, and S&M sex was ruled to be illegal in the Spanner case.

Section 61 of the Act dealt with “unnatural offences” specifying “buggery”. It replaced the death penalty for buggery with life imprisonment “for any term not less than ten years”. This section replaced section 15 of the 1828 Act. A total of 8921 men had been prosecuted since 1806 for sodomy with 404 sentenced to death and 56 executed.[2]

Section 62 for the first time introduced the offences of attempted sodomy and indecent assault, with a penalty of between 3 and 10 years penal servitude, or two years imprisonment with hard labour.

In England and Wales section 61 was repealed and replaced by section 12(1) of the Sexual Offences Act 1956.

In Northern Ireland section 62 was found to be incompatible with the Convention for the Protection of Human Rights and Fundamental Freedoms and was repealed by the Sexual Offences Act 2003.