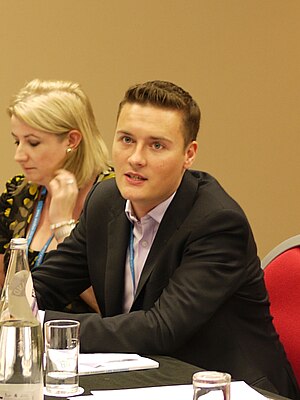 Wes Streeting
Wes Streeting (Wesley Paul William Streeting, born 1983) is a Labour politician and former national president of the National Union of Students. At the 2015 general election he was elected MP for Ilford North.

Streeting was born in Tower Hamlets and studied history at Selwyn College, Cambridge. He was elected president of the NUS in April 2008 and re-elected in April 2009.

In 2009 he was listed at number 33 in the Pink News list of 50 most powerful gay, lesbian and bisexual people in British politics. The citation said:

"Don’t let his boyish looks deceive you. Wes Streeting is a tough fighter, renowned for his ability to beat his opponents into submission using only the force of his argument. While coy about his political ambitions, he is already spoken of as a future Cabinet minister."[1]

Since 2010 he has been a councillor on Redbridge Borough Council. He has also worked as Chief Executive of the Helena Kennedy Foundation.