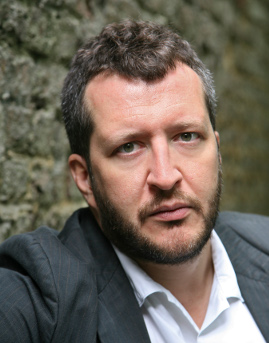 Adès was born in London and studied piano and later composition at the Guildhall School of Music and Drama. After attending University College School, Hampstead, he achieved a double starred first in 1992 at King's College, Cambridge. He was made Britten Professor of Composition at the Royal Academy of Music, and in 2004 was given an honorary doctorate by the University of Essex.[1]

In 2007 a retrospective festival of his work was presented at the Barbican Arts Centre and he was the focus of Radio France's annual contemporary music festival, "Présences" and Helsinki's "Ultimo" festival. The Barbican festival, "Traced Overhead: The Musical World of Thomas Adès", included the UK premiere of a new work for Simon Rattle and the Berlin Philharmonic, Tevot. In Spring 2007, his opera The Tempest returned to the Royal Opera House, Covent Garden. In 2009, he was the focus of Stockholm Concert Hall's annual Composer Festival and was in 2010 he was appointed foreign member of the Royal Swedish Academy of Music.

"The stock of the composer, conductor and pianist rises ever upwards: he was runner-up in the 1990 BBC young musician of the year competition; his 1995 chamber opera, Powder Her Face, is popular around the world. New York's Metropolitan Opera is to stage his "heart-stoppingly beautiful" production of The Tempest."[2]