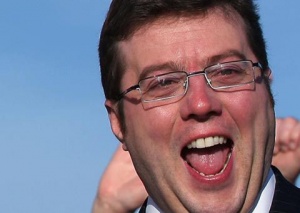 He was born in Glasgow, and has lived there all his life. He was elected to Glasgow City Council in 1986 and became leader of the council in 2005. He played an important part in bringing the 2014 Commonwealth Games to Glasgow.[1]

In 2006 he announced that he was gay and was separating from his wife.[2]

In 2009 he was listed at number 16 in the Pink News list of 50 most powerful gay, lesbian and bisexual people in British politics.

In March 2010 he resigned as leader of the council and then as a councillor, following a spell in Castle Craig Hospital, a "drug and alcohol addictions hospital" in the Scottish Borders.[3]