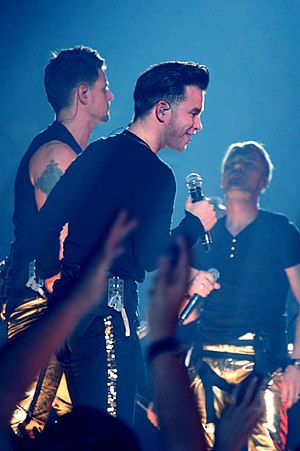 Gately was born in Dublin. He joined Boyzone on its formation in 1993.

Gately came out as gay in 1999 after discovering that an acquaintance was about to sell the details of his sexuality to the media. He was subsequently described as a "champion of gay rights, albeit a reluctant one".[1]

Gately started dating Andrew Cowles, an internet businessman,[2] who had been introduced to him by mutual friends Elton John and David Furnish. Gately and Cowles held a commitment ceremony in a wedding chapel while on holiday in Las Vegas in 2003. In 2006, they formed a civil partnership in a ceremony in London.[3] The couple lived together in Highgate, North London. Gately spoke of his love for the village, saying he "wouldn't move away for the world. It has a great vibe and the people here are brilliant".[4]

Stephen Gately died at his home in Port d'Andratx, Majorca, early on 10 October 2009. His death was later determined to have been caused by a pulmonary edema resulting from an undiagnosed heart condition.[5] An article in the Daily Mail by Jan Moir following his death was widely criticised as homophobic.