From LGBT Archive
(Redirected from Southwark)
Jump to: navigation, search 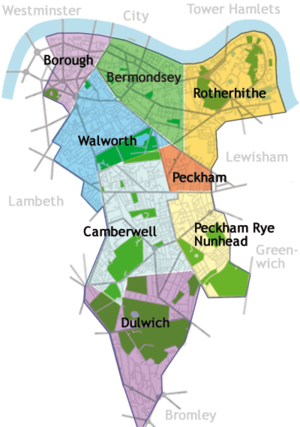 Areas of Southwark
The London Borough of Southwark is an inner London borough south of the Thames. It was formed in 1965 from the former metropolitan boroughs of Southwark, Bermondsey and Camberwell. The original core of Southwark, on the south side of London Bridge, is also known as the "Borough" (as opposed to the "City"). Other districts within the London Borough include Rotherhithe, Dulwich, Newington, Peckham and Nunhead.

The Southwark Diocese Lesbian and Gay Network was formed in 1993.

In November 1996 LGCM held its 20th anniversary event at Southwark Cathedral with John Gladwin, then Bishop of Guildford, as preacher. This was the first Anglican cathedral service in Britain held for gay people.

In 2006 a local councillor claimed that the Borough was run by a "gay clique".[1]

In 2010, Southwark Council honoured Peter Tatchell with a Blue Plaque.[4]

Southwark Pride has been held at the Ivy House, Nunhead.

Bede House offers practical and emotional support and advice to members of the LGBT community who are experiencing domestic violence or hate crime.[6]