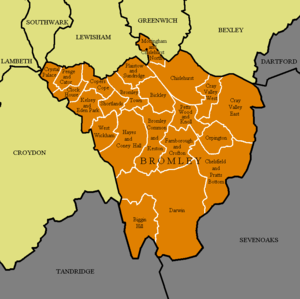 Bromley showing wards
Bromley is the largest by area of the London Boroughs.

As well as the town of Bromley, the Borough includes Beckenham, Penge, Orpington, Chislehurst and Petts Wood

At one time there was a Bromley CHE Group. Gay discos used to take place in Chislehurst Caves.

Following the passing of the Civil Partnership Act 2004, Bromley Council initially said they would refuse to conduct civil parnerships.[1]

In the 2006 General Election, an independent candidate made homophobic remarks about the Conservative candidate[2]

The main LGBT venue in Bromley is the Star and Garter has been the High Street, reopened after a major facelift but apparently no longer gay. At one time there was another gay pub, the Crown and Anchor near Bromley North station.

The Junction is a drop-in centre, providing services to people living with and/or affected by HIV/AIDS in Bromley and surrounding areas.

Wilde About Books, an LGBT reading group supported by Bromley Library, seems to be currently dormant.

Gay Petts Wood dot Com is an informal group meeting in Petts Wood. It hosts the website of the Bromley Gay Rights Campaign.

SNAP (Sexuality Not A Problem) is a youth group for lesbian, gay and bisexual young people (under 25) meeting weekly in Bromley, run by outreach workers from the Metro Centre.