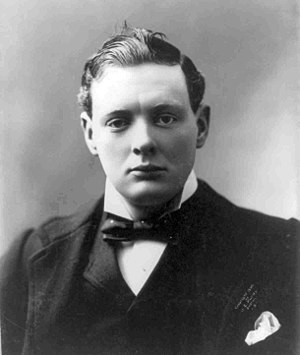 Winston Churchill in 1900
Sir Winston Leonard Spencer Churchill (1874–1965) was a British writer and statesman, who led Britain to victory in the Second World War.

A descendant of the Duke of Marlborough, he was born at Blenheim Palace. As a young cavalry officer he took part in a cavalry charge. As a war correspondent he escaped from a prisoner of war camp in the Boer War. He entered parliament as a Conservative in 1900 but switched to the Liberal Party in 1904. During the First World War he served as First Lord of the Admiralty. In 1924 he re-joined the Conservative Party and became Chancellor of the Exchequer, but from 1929 he was out of office and became estranged from the Conservative leadership. On the outbreak of war in 1939 he was brought into the Government in his old job at the Admiralty. When Chamberlain resigned in 1940, Churchill became Prime Minister, in which role he was an inspiring leader. Defeated in the 1945 election, he was Prime Minister again from 1951 to 1955. He wrote many books, and received the Nobel Prize for literature.

In 1895 he was accused of having committed "acts of gross immorality of the Oscar Wilde type" while a cadet at Sandhurst. Churchill sued the accuser for defamation and was awarded £400 in damages.[1]

Throughout his life, Churchill showed little interest in women other than his wife, enjoyed the company of homosexuals, and was deeply attached to male friends and his long-standing secretary Edward Marsh, although there is no evidence of any physical relationships.[2]

The writer W Somerset Maugham is said to have asked Churchill whether he ever had any homosexual experience, and been told:

"I once went to bed with Ivor Novello: it was very musical."[3]

In February 1954 Churchill's cabinet discussed the possible decriminalisation of homosexuality, following an increase in the number of convictions for gay offences. Churchill said “Remember that we can’t expect to put the whole world right with a majority of 18.”[4] He considered that public opinion was not yet calling for a change in the law, but holding an enquiry might be a way forward (the Wolfenden Committee was appointed later that year).

The following sayings are attributed to Churchill: