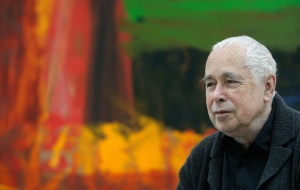 Hodgkin, a cousin of the English still life painter Eliot Hodgkin (1905–87),[2] was educated at Eton College and then at Bryanston School in Dorset. He then studied at the Camberwell Art School and later at the Bath Academy of Art in Corsham, where Edward Piper studied drawing under him.

Hodgkin's first solo show was in London in 1962. His early paintings tend to be made up of hard-edged curved forms in a limited number of colours.

Around the beginning of the 1970s, Hodgkin's style became more spontaneous, with vaguely recognisable shapes presented in bright colours and bold forms. His works may then be called "semi-abstract", and are often compared to the paintings of Henri Matisse.

In 1995, Hodgkin printed the Venetian Views series, which depict the same view of Venice at four different times of day. Venice, Afternoon - one of the four prints - uses sixteen sheets, or fragments, in a hugely complex printing process which creates a colourful, painterly effect.

In 2003 he was appointed a Companion of Honour. A major exhibition of his work was mounted at Tate Britain in 2006.

His prints are hand-painted etchings and he has worked with the same master printer (Jack Shirreff at 107 Workshop) and print publisher (Alan Cristea Gallery) for the last 25 years.

In 2000 he was included in the first Pink List. The citation said:

"Winner of the Turner prize in 1985 and knighted seven years later, Hodgkin is a supremely gifted abstract artist, with a pronounced lyrical gift, as well as an accomplished teacher and critic. His global haul of exhibitions, awards and honorary degrees must be unrivalled."[3]