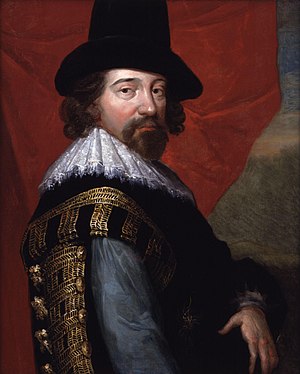 Portrait of Francis Bacon by John Vanderbank (c 1731), after a portrait by an unknown artist (c 1618)
Francis Bacon, 1st Viscount St Albans (1561–1625) was an English philosopher, scientist and statesman.

Bacon was educated at Trinity College, Cambridge for three years from the age of 12, under the tutelage of John Whitgift, later Archbishop of Canterbury, and then at the University of Poitiers. He later studied law, and became a member of parliament. He rose to be Lord Chancellor, but fell into debt. In 1621 he was convicted of corruption, and debarred from holding further offices.

Bacon is known as an early proponent of the scientific method, in opposition to the then-popular Aristotelian philosophy. His devotion to scientific experiments is said to have been the cause of his death: he died of pneumonia after stuffing a fowl with snow to study the effects of freezing on the preservation of meat.

Bacon was married, but had no children, and his wife was suspected of adultery. Bacon himself was reported to be homosexual. John Aubrey noted among his private memoranda concerning Bacon, "He was a Pederast. His Ganimeds and Favourites tooke Bribes",[1] Professor Charles Forker[2] has explored the "historically documentable sexual preferences" of both King James and Bacon – and concluded they were all oriented to "masculine love", a contemporary term that "seems to have been used exclusively to refer to the sexual preference of men for members of their own gender."[3]