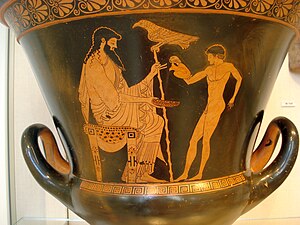 Ganymede pouring a drink for Zeus
Ganymede was a term sometimes used to refer to passive gay men or youths. It derives from the mythological figure Ganymede (Ancient Greek Γανυμήδης, Ganymēdēs) a Trojan prince whom the god Zeus (Jupiter), in the form of an eagle, carried off to be his cup-bearer on Mount Olympus.

"He [ Francis Bacon (philosopher) ] was a Pederast. His Ganimeds and Favourites tooke Bribes."[1]

The twelfth-century poet Hilarius compares William of Anfonia, the "splendour of England", to Ganymede, writing

"Certainly if Jupiter now reigned, ... he would become a bird for you, so that you might be joined with him forever,"[2]

The Elizabethan poet Richard Barnefield tells in his poem The Tears of an affectionate Shepherd sick for Love of a shepherd and his beloved Ganimede.[2]

In the 18th century a satirical print of Samuel Drybutter was printed with the caption "Ganymede".

In Latin (via Etruscan) the name was rendered as "Catamitus", hence the more common term Catamite.