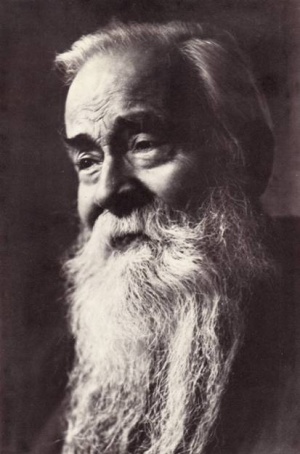 Backhouse was born in Darlington to a Quaker family. He inherited the baronetcy in 1918 from his father, Sir Jonathan Backhouse, a director of Backhouse's Bank, Darlington, and later of Barclays Bank. He was educated at Winchester College, and went on to Merton College, Oxford, but left without a degree, fleeing the country to escape from his creditors.[1]

In 1899 he arrived in Peking (now Beijing) having learnt Chinese and other languages. He remained in China for most of his life, mainly working as a translator and intermediary for Western businesses. From around 1910 he collaborated with the journalist J O P Bland on two books about Chinese history, China Under the Empress Dowager and Annals and Memoirs of the Court of Peking, with Backhouse providing the source materials and Bland converting them to readable manuscripts. However doubt was soon cast on the accuracy of the work. In particular China Under the Empress Dowager was claimed to be based on so-called Diary of His Excellency Ching-Shan, which was subsequently found to be a forgery.

In 1913 Backhouse began to donate many Chinese manuscripts to the Bodleian Library in Oxford, hoping to receive a professorship in return. He delivered a total of eight tons of manuscripts to the Bodleian between 1913 and 1923. The provenance of several of the manuscripts was later cast into serious doubt. Nevertheless, he donated over 17,000 items, some of which "were a real treasure", including half a dozen volumes of the rare Yongle Encyclopedia of the early 1400s.[2]

"The acquisition of the Backhouse collection, one of the finest and most generous gifts in the Library's history, between 1913 and 1922, greatly enriched the Bodleian's Chinese collections."[3]

During the Second World War, Beijing was occupied by the Japanese. Backhouse sought refuge in the British Legation, then in the French Hospital of St Michael, where he was befriended by Dr Reinhard Hoeppli, the Honorary Swiss Consul. Dr Hoeppli commissioned Backhouse to write his memoirs, primarily as a way of occupying him, and also as a way of giving the proud old man financial assistance without insulting his poverty. On receiving the manuscripts, Hoeppli, horrified and yet fascinated by their contents, deposited copies in three major academic libraries, with instructions that they should not be published until after his death. The manuscripts describe Backhouse's supposed sexual encounters with Oscar Wilde and the French poet Paul Verlaine, but also with women including notably the Empress Dowager Cixi of China. In 1973 the British historian Hugh Trevor-Roper (famous for having asserted the authenticity of the forged "Hitler diaries") read Backhouse's memoirs and described them as "pornographic," and eventually declared their contents to be figments of Backhouse's fertile imagination. The memoirs were published in 2011 as Décadence Mandchoue: The China Memoirs of Sir Edmund Trelawny Backhouse, edited by the American writer Derek Sandhaus, who has said that Trevor-Roper did not consult specialists in Chinese affairs, and seems to have read only enough of the text to have been disgusted by its homosexuality. While conceding that Backhouse fabricated or imagined many of these assignations, Sandhaus finds that others are plausible or independently confirmed and reasons that Backhouse spoke Chinese, Manchu, and Mongolian, the languages of the imperial household, and his account of the atmosphere and customs of the Empress Dowager's court may be more reliable than Trevor Roper allowed.[4]