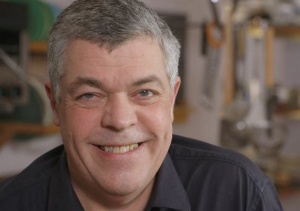 He was born in Bury, Lancashire and started his career at the age of 17 in the kitchens of Le Normandie in Birtle, Lancashire. In 1978 he became the youngest chef to acquire an Egon Ronay Guide star with his restaurant The Shed in Dinas, Pembrokeshire.[1] He worked for two and a half years as an Egon Ronay inspector. From 1987 to 1995 he was chef and joint proprietor of Bibendum, the former Michelin House on Fulham Road.

He has had a cookery column in The Independent and in 1994 his first book Roast Chicken and Other Stories (co-authored with Lindsey Bareham) was published. It later won a Glenfiddich Food and Drink Award.[2] In 2005 it was voted "Most Useful Cookbook of All Time" by Waitrose Food Illustrated magazine.[3]

Since leaving Bibendum he has concentrated on cookery writing, and he has also presented cookery programmes on television.

"It's been a great year for the chefs' favourite chef and author of the seminal cookbook Roast Chicken and Other Stories. Known to his friends as 'Hoppy', and one of the nicest men in food, he has moved from cult concern to mainstream hot property with his seven-part BBC 1 series The Good Cook.[4]