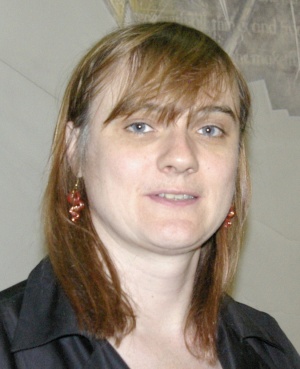 Sarah Brown, May 2012
Sarah Brown was elected to Cambridge City Council in 2010. She is also on the executive of LGBT+ Liberal Democrats and chairs its transgender working group. She describes herself as “probably the only ‘out’ transgender activist serving as an elected politician in the UK”.[1]

In 2001 she married Sylvia Knight. In 2007 she underwent gender reassignment surgery. In 2009, Sarah and Sylvia had to be divorced and then form a civil partnership - something that will not be necessary when equal marriage becomes law.[2]

Sarah Brown was placed number 28 on the Independent on Sunday Pink List 2011, and was the highest-ranking transgender person on the list.

Her favourite hobby is rock climbing.

Brown is currently in a polyamorous relationship with Knight and fellow Liberal Democrat and transgender activist Zoe O'Connell, although none of them describe themselves as "poly evangelists".[3] All three partners contributed to a Guardian column discussing polyamory in the context of transition and Brown's previous marriage, which was later cited by her local MP during the Marriage (Same-Sex Couples) Bill debate.[3]