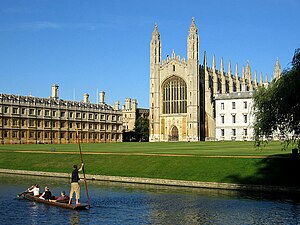 King's College Chapel, seen from The Backs
Cambridge is a city in Cambridgeshire, mainly known as the location of the University of Cambridge, one of the two ancient English universities.

Queer Cambridge is a directory of queer groups, resources, organisations and links aimed for those in Cambridge.[1]

Cambridge Diamonds is a social and self-help group supporting the transgender community in Eastern England.[2]