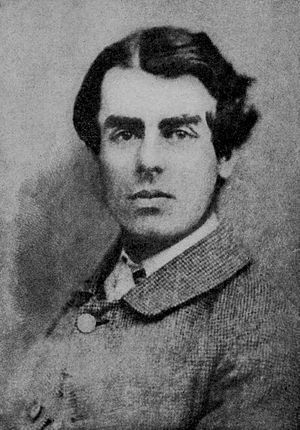 Samuel Butler in 1858, aged 23
Samuel Butler (1835–1902) was an English novelist, chiefly remembered for Erewhon (a utopian satire) and The Way of All Flesh (a semi-autobiographical novel, published posthumously. (He should not to be confused with the 17th century poet of the same name, author of Hudibras.)

Butler's father was a clergyman, and his grandfather, Dr Samuel Butler, was Headmster of Shrewsbury School and Bishop of Lichfield. Butler was also originally intended for the priesthood, but questioned his faith and thereby fell out with his father. He then emigrated to New Zealand and became a sheep farmer. He returned to England in 1864.

Butler never married. He had a number of intense though probably platonic relationships with men, including his biographer, Henry Festing Jones. Butler and Jones regularly visited the same prostitute: according to Herbert Sussman, "Even the scheduled excursions into heterosexual sex functioned less to relieve the sexual tension of bachelorhood than to act out the intense same-sex desire for one's daily companions... In characteristic Victorian fashion, then, these men ... perform[ed] their sexual bond through the body of a woman."[1]

In 1895 Butler wrote a poem entitled "In Memoriam H R F" (on the occasion of a young friend of Butler and Jones emigrating to Singapore) and submitted it to several magazines, but got it withdrawn when Oscar Wilde's trial began, fearing that it would identify him as homosexual.[2]