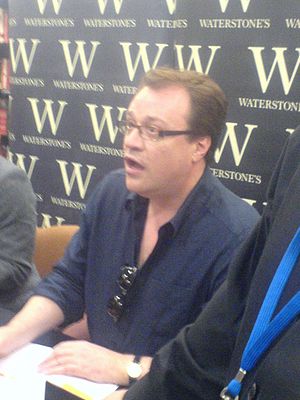 Russell T Davies
Russell T Davies (real name Stephen Russell Davies, born Swansea 1963), is a Welsh television producer and screenwriter. His works include Queer as Folk (1999–2000), Bob & Rose (2001), the 2005 revival of Doctor Who, and the trilogy Cucumber, Banana and Tofu (2015). In 2017, Davies produced and wrote the screenplay for A Very English Scandal, an adaptation of the book of the same name about the Thorpe affair, a sex scandal which involved former Liberal Party leader Jeremy Thorpe.

He was the guest on Desert Island Discs on 3 Nov 2019 [1]. Davies was in a relationship with Andrew Smith, a customs officer, between 1999 and Smith's death in 2018.They entered into a civil partnership on 1 December 2012.

In 2021 Channel 4 broadcast a five part drama called It's a Sin written by Davies. The drama features Olly Alexander as a young gay man called Richie who arrives in London in September 1981. The drama deals with how AIDS impacted on the lives of many gay men and their families.