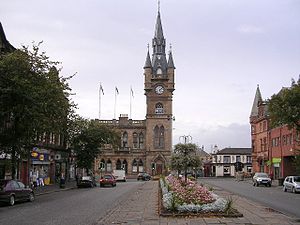 Renfrew Town Hall
Renfrewshire is a council area in Scotland. It was created in 1996 from the major part of the Renfrew district, in the former Strathclyde region. The largest town is Paisley. Historically the county of Renfrewshire covered a larger area, including the current Renfrewshire, East Renfrewshire and Inverclyde.

Renfrewshire Council aims to raise awareness of LGBT issues, challenge negative attitudes and homophobia and ensure that the LGBT community is consulted in service design and delivery.[1]

Derek Mackay is MSP for Renfrewshire North and West.

In 2013 a trans woman from Johnstone complained of harrassment and being called a "witch", causing her to leave town.[2]