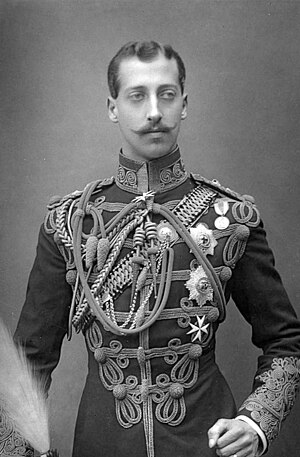 Albert Victor, Duke of Clarence
Prince Albert Victor, Duke of Clarence and Avondale (1864–1892), known to his family as "Eddy" was the eldest son of Albert, Prince of Wales (later King Edward VII) and 'Heir Presumptive' – second-in-line to the British throne. He was the grandson of Queen Victoria, who named him after her beloved Albert and herself (Victor). He died at the age of 28 in a great influenza pandemic; had he lived to be 47 he would have succeeded his father as King. At the time of his death he was engaged to be married to Princess Mary of Teck, who subsequently married his brother George (later King George V). Princess Mary was neither pretty nor rich.

There were various rumours of scandal surrounding Eddy (including a clearly false suggestion that he might have been Jack the Ripper). The most widely spread rumour was that he had been involved in the Cleveland Street scandal about a male brothel, along with other noblemen including the Earl of Euston and Lord Arthur Somerset. It was reported that Eddy frequented the brothel and signed in, as was customary, using a female name, “Victoria”. When the scandal broke in the news, "Eddy" was safely on a long tour of India, arranged by his family.