From LGBT Archive
(Redirected from Earl of Euston)
Jump to: navigation, search 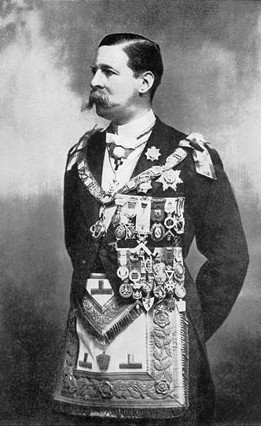 The Earl in Masonic regalia
Henry James Fitzroy, Earl of Euston (28 November 1848 – 10 May 1912) was the eldest son and heir of Augustus FitzRoy, 7th Duke of Grafton.

Euston married Kate Walsh, daughter of John Walsh, on 29 May 1871 at St. Michael's Church, Worcester. His wife died in 1903, nine years before him. They had no children. Euston died at Wakefield Lodge, Potterspury, Northamptonshire, six years before his father, and so never inherited his father's lands and titles. His younger brother, Alfred, became the 8th Duke of Grafton.

Euston was embroiled in the Cleveland Street scandal when he was accused of visiting a male brothel at 19 Cleveland Street in London by The North London Press, an obscure radical weekly newspaper. Euston sued for libel. At the trial Euston admitted that when walking along Piccadilly he had been given a card by a tout which read "Poses plastiques. C. Hammond, 19 Cleveland Street". Euston testified that he went along to the house, believing Poses plastiques to mean a display of female nudes. He paid a sovereign to get in. On entry, Euston said he was appalled to discover the "improper" nature of the place and immediately left. The defence witnesses contradicted each other, and could not describe Euston accurately. The final defence witness, John Saul, was a male prostitute who admitted to earning his living by leading an "immoral life" and "practising criminality". The jury did not believe the defence witnesses and found in favour of Euston. H Montgomery Hyde, an eminent historian of homosexuality, later wrote that there was little doubt that Euston was telling the truth and only visited 19 Cleveland Street once because he was misled by the card.

More recent scholarship has suggested that Euston did have a connection to London's homosexual world. According to Oscar Wilde biographer Neil McKenna, Euston was blackmailed by Robert Cliburn, a young man who specialized in blackmailing older homosexual men.