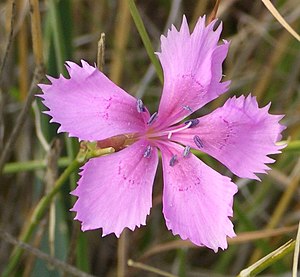 Clove pink (Dianthus caryophyllus)
Pink is a colour often seen as having gay and feminine connotations.

The word came into use in the 17th century, and derives from the flowers of the same name (from the genus Dianthus, some varieties of which are also referred to as carnations).

Conventionally, pink is used for baby girls clothes and blue for boys; however this convention only became established around 1940.

"A June 1918 article from the trade publication Earnshaw's Infants' Department said, 'The generally accepted rule is pink for the boys, and blue for the girls. The reason is that pink, being a more decided and stronger color, is more suitable for the boy, while blue, which is more delicate and dainty, is prettier for the girl'."[1]

Pink's association with homosexuality may date from the use of the pink triangle for gay men in Nazi concentration camps. LGBT publications and groups with Pink in their name have included:

An early version of the rainbow flag had a pink stripe.

The trans flag has blue, pink and white stripes.