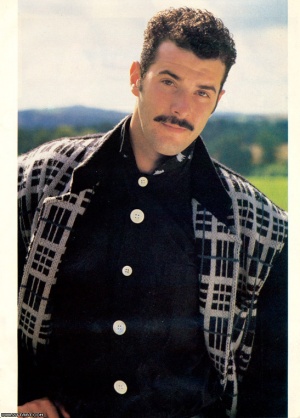 He was born in Liverpool and studied art at the St Helen's Art School (but was thrown out).

He was formerly with "Frankie Goes to Hollywood" alongside with Holly Johnson, at the time rumoured to be his boyfriend, whose 1983 single "Relax" became a hit after it was banned by the BBC station Radio One - the music video for the song was full of sadomasochistic (SM) imagery.

He emerged from the 1970s punk scene on Merseyside founding initial fame with St Helen's band the The Spitfire Boys. He is the former backing vocalist and dancer with 1980s pop band Frankie Goes to Hollywood (FGTH), one of the group's two openly gay singers.

He later teamed up with Johnson in a new band which would go on to dominate the UK Singles Chart in 1984 thanks to a mixture of skill, controversy, marketability and luck. The band disintegrated two years later and Rutherford attempted a solo career which was short lived: In 1989 three singles and the album "Oh World" were released.