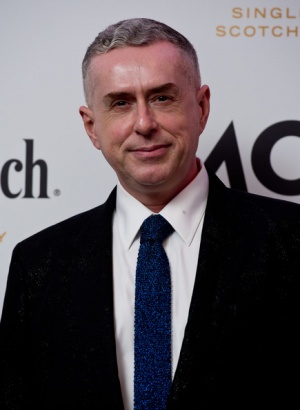 Holly Johnson
Holly Johnson (born William Johnson, 1960[1]) is an English artist, musician and writer, best known as the lead vocalist of Frankie Goes to Hollywood, who achieved huge commercial success in the mid-1980s. The band's "Relax" was banned by the BBC because of the suggestive lyrics and gay-themed record cover, and sold two million copies.

Prior to that, in the late 1970s he was a bassist for the band Big in Japan. He was born in Liverpool.

In 1989, Johnson's debut solo album, Blast, reached number one in the UK albums chart. Two singles from the album, "Love Train" and "Americanos" reached the top five of the UK Singles Chart.

In the 1990s he embarked on a painting career.

He was ranked number 33 in the Pride Power List 2011. The citation said:

"Uncompromisingly out from the start as the lead singer of Frankie Goes To Hollywood, Liverpool’s favourite gay son is still a big draw at Pride events and still making music."[2]