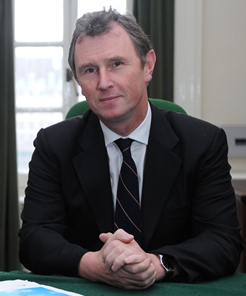 He was born and educated in Swansea and was a county councillor in West Glamorgan from 1985 to 1991. Since 1992 he has been MP for Ribble Valley, Lancashire.

In 2010 Nigel Evans was elected First Deputy Chairman of Ways and Means and a Deputy Speaker of the House of Commons.

On 18 December 2010, Nigel Evans revealed to the Mail on Sunday that he is gay, saying that he was fed up with living his life as a lie.[1]

In September 2013 he resigned as Deputy Speaker on being charged with sexual offences against men, which he strongly denied.[2] In April 2014 he was cleared of all charges.[3]