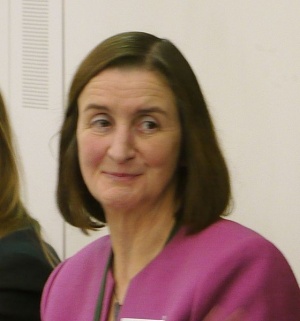 Nia Griffith
Nia Griffith (Nia Rhiannon Griffith, born 1956) is a Labour politician, who has been MP for Llanelli since 2005.

She was born in Dublin[1] but her family comes from mining villages near Neath, in South Wales. She was educated at Newland High School for Girls in Hull and Somerville College, Oxford where she graduated with a first class degree in modern languages in 1979.[2] After Oxford, she trained to be a teacher at the University of Wales, Bangor.

Griffith is divorced, her former husband was a social worker.[2][3] In a photo shoot for The Independent in February 2016, Griffith came out as Lesbian, commenting that her sexuality had been known among friends, family and colleagues since the mid-1990s.[4]