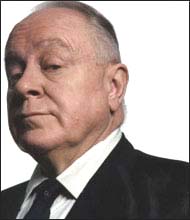 He was born in Low Ham, South Somerset and went to a state boarding school in Bruton. He studied law at Exeter College, Oxford and qualified as a barrister, but soon became involved in television.

In 1962 he was responsible for the first satirical television series That Was The Week That Was and its successors Not So Much a Programme, More a Way of Life and BBC-3. His other shows and films included Up Pompeii!, Up the Front, The Cobblers of Umbridge and The Virgin Soldiers. In 1978 he hosted We Interrupt This Week, a lively and humorous news events quiz featuring two teams of well-known journalists and columnists sparring against one another.

Sherrin produced and directed numerous theatre productions in the West End, including Jeffrey Bernard is Unwell and the landmark musical Side By Side By Sondheim. He received an Olivier Award in 1984 for directing and conceiving The Ratepayers' Iolanthe, an adaptation by Sherrin and Alistair Beaton of the Gilbert and Sullivan opera Iolanthe.

On BBC Radio 4, from 1986, he presented a light entertainment show on Saturday mornings (latterly evenings) called Loose Ends,[4] and Counterpoint, a quiz show about all types of music, subsequently hosted by Paul Gambaccini.

He also toured the UK with his one man show An Evening of Theatrical Anecdotes.

Sherrin wrote two volumes of autobiography, several books of quotations and anecdotes, as well as some fiction; and several works in collaboration with Caryl Brahms.

Openly gay,[1] he was a patron of the London Gay Symphony Orchestra.[2] Sherrin was awarded a CBE in the 1997 New Year’s honours list.