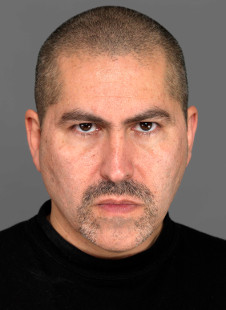 Michael Petry
Michael Petry (born El Paso, Texas, 1960) has lived in London since 1981. He studied at Rice University, Houston (BA), London Guildhall University (MA), and has a Doctor in Arts from Middlesex University.

Petry is an internationally exhibited artist, Director of the Museum of Contemporary Art (MOCA) London, and Guest Curator for Futurecity. He co-founded the Museum of Installation, and was Guest Curator at the Kunstakademiet, Oslo, and Research Fellow at the University of Wolverhampton and was Curator of the Royal Academy Schools Gallery. Petry co-authored Installation Art (1994), and Installation in the New Millennium (2003), and authored Abstract Eroticism (1996) and A Thing of Beauty is... (1997). The Trouble with Michael, a monograph of his practice, was published by Art Media Press in 2001.

Petry’s book Hidden Histories: 20th century male same sex lovers in the visual arts (2004) is the first comprehensive survey of its kind, and accompanied the exhibition "Hidden Histories" he curated for The New Art Gallery Walsall.

His two-volume book Golden Rain (2008) accompanied his installation for the "On the Edge" exhibition for Stavanger 2008, European Capital of Culture. Petry’s book, The Art of Not Making: The New Artist Artisan Relationship for Thames & Hudson was published in April, 2011. Petry was the first Artist in Residence at Sir John Soane’s Museum (2010/11) exhibiting two bodies of work, published in Smoke & Mirrors (2011).

He had a one man show "The Touch of the Oracle"[1] at the Palm Springs Art Museum during 2012, with a ten-year career review book distributed by Thames & Hudson.