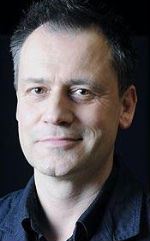 Grandage was born in Yorkshire and raised in Penzance, where his parents ran a family business. He trained as an actor at the Central School of Speech and Drama. He spent twelve years working as an actor for companies such as the Royal Exchange and the Royal Shakespeare Company before turning to directing. He made his directorial debut in 1996 with a production of The Last Yankee at the Mercury Theatre, Colchester. In 1998 he was invited to Sheffield to direct Twelfth Night, his first Shakespeare production.[1] He lives in London and Cornwall with his partner, the award-winning theatre designer Christopher Oram.[2]

"It's been a fitting final year for the revered artistic director of the Donmar Warehouse, which included Derek Jacobi's celebrated Lear. The 49-year-old's final production will be Richard II in December. He'll then leave subsidised theatre – first up, a new Don Giovanni at New York's Metropolitan Opera."[3]