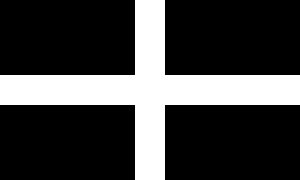 St Piran's flag, the national flag of Cornwall
Cornwall (Cornish: Kernow) is a county and unitary authority in south-west England. Cornwall is sometimes considered one of the Celtic nations: the Cornish language became essentially extinct in the 19th century, but there has been an attempt to revive it more recently. Tin mining was important in Cornwall from very early times. The county town of Cornwall is the city of Truro. Other towns include Falmouth, Penzance, St Ives, Newquay, Redruth and Camborne. Smaller towns include Marazion and Penryn.

The Isles of Scilly are a separate unitary authority, but part of the ceremonial county of Cornwall.

Cornwall is part of the Devon and Cornwall Police area.

There was a Cornwall CHE Group in the 1970s.

The LGBT Collective connects LGBT communities in the south-west peninsula, including Cornwall, Devon, Somerset and Dorset.

Cornwall Pride has been held annually in Truro since 2008

Healthy Gay Cornwall provides services and resources to promote good sexual health and general well being for men that have sex with men.