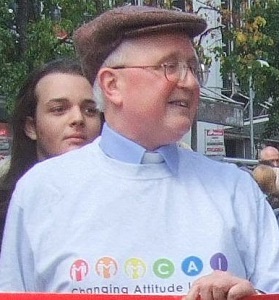 He was born in East Belfast, and worked for the Department for Health and Social Services, before being ordained in 1974 as a priest of the Church of Ireland. Until forced by ill-health to retire, he was Rector of Creggan, Ballymascanlon and Rathcor, thus serving an area covering parts of north Louth (in the Republic) and south Armagh (in Northern Ireland).[2]

In 2003 Mervyn Kingston, together with his partner, the academic Dr Richard O'Leary, founded Changing Attitude Ireland, which has campaigned for the full inclusion of LGBT people in churches and for the introduction of civil marriage equality in both parts of Ireland.[1] In 2005, two year's before Rev Kingston's retirement from the ministry, he and Dr O'Leary formed a civil partnership.

In 2006 he achieved a significant victory for gay people. The Department of Social and Family Affairs had refused to pay adult dependent allowance to Dr O'Leary, who had taken unpaid leave from work to care for him. The Department initially refused to pay: Kingston appealed to the Equality Tribunal, and the Government overturned the refusal.[2] He then had another struggle, to get the Church of Ireland to ensure his full pension rights could be transferred to his partner. Eventually, the church gave Dr O'Leary the same right of access to pension as spouses of married clergy, and the pension policy was changed for other civil partnered couples.[3]

In 2009 he was due to take part, on behalf of Changing Attitude, in a service in St Patrick’s Cathedral, Armagh, intended to "celebrate diversity"; he was to have prayed that God would "bless all of our relationships" and "give us patience and understanding as we seek to build bridges with those who have difficulty in accepting us and our opinions", but the Orange Order objected to his taking part and the service was cancelled.[4]

In 2012 he told a fringe meeting at a Church of Ireland conference on sexuality that he was the terminally ill clergyman who had been refused "Permission to Officiate" by the Bishop of Down in 2007 and by the Bishop of Connor in February 2012.[5]