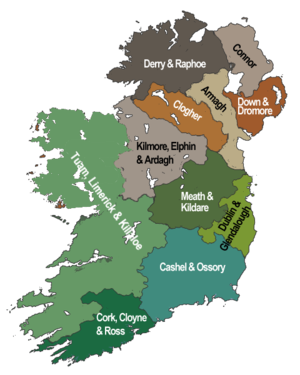 Dioceses of the Church of Ireland
▉▉▉ Province of Armagh
▉▉▉ Province of Dublin
The Church of Ireland is a church within the Anglican Communion, covering the whole of the island of Ireland. It separated from the Roman Catholic Church at the same time as the Church of England, becoming the established church for Ireland, although unlike in England the majority of the priests and lay people remained Catholic. It was disestablished in 1871. When Ireland was partitioned in the 1920s the church continued to serve both parts of the island.

The church is divided into twelve dioceses, in two provinces: North (Province of Armagh) and South (Province of Dublin), but this does not correspond to the political division. The Archbishop of Armagh is recognised as the spiritual head of the church.

In November 2013 Rev Pat Storey, a rector in Londonderry, was elected Bishop of Meath and Kildare in the Republic, becoming the church's first woman bishop.[1]