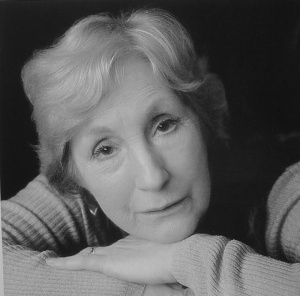 Meg Atkins was born in Essex and worked as a stable hand before moving to Manchester where she worked as a secretary, flitting between jobs to support her writing. Later she became a full-time writer, living with her husband in Lincolnshire.[3] Her early novel The Gemini (which she later repudiated as an apprentice effort) has a gay theme. Later she specialised in crime fiction, with her series character DCI Sheldon.[4] She is perhaps best known for Palimpsest and Cruel as the Grave.[2]

Although heterosexual, she got involved in the North Western Committee because her best friend was a gay man:

"It seemed to me a total injustice that simply because of your sexual inclinations you should be criminalised."[5]

Around 1966 she conducted a personal campaign around the industrial firms in the Trafford Park estate in Manchester, visiting firms' welfare officers, and asking them to support the campaign for decriminalisation.[6]