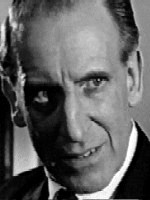 Max Adrian was born in Enniskillen, County Fermanagh.[1] He was educated at the Portora Royal School, Enniskillen, whose past pupils also included Oscar Wilde and Samuel Beckett.[2] He began his career as a chorus boy at a silent moving-picture house, coming on as part of the chorus line while the reels were being changed.

In addition to his success as a character actor in classical drama, he was known for his work as a singer and comic actor in revue and musicals, and in one-man shows about George Bernard Shaw andGilbert and Sullivan, and in cinema and television films, notably Ken Russell's Song of Summer as the ailing composer [Frederick Delius. His voice and acting style were distinctive: The Times referred to his "Osric-like elaborations of manner", and his voice "like no other heard on the English stage of his day, vestigially Irish and harshly attractive."[3]

In 1947, at the Lyric Theatre, Hammersmith, Adrian began performing in a series of revues in which he played more than 2,000 performances,[4] and established himself, in Sheridan Morley's words, "as a superlative – if eccentric – light comedian."[2] The revues were produced by Laurier Lister (1907–1986), who became Adrian's lifelong partner.[5]

In 1940 Adrian was arrested for importuning at Victoria Station and sentenced to three months imprisonment. Few gay friends visited him inside, such was the climate of the time. However one who stood by him was Michael Redgrave, whose son, Corin, Max had stood godfather to. Redgrave visited him frequently in prison and tried unsuccessfully to find a way to have the sentence reduced. When Adrian was released from prison he found it hard to get work, until Redgrave used his influence to get him a part in his movie of the HG Wells novel, Kipps, in which Adrian plays Chester Coote, Kipps’ guide to high society after he has come into money. Redgrave also got him a small part in his next movie, Jeannie, and he was fully rehabilitated when Laurence Olivier cast him as The Dauphin in Henry V.

In the words of director Frith Banbury, himself gay:

"Redgrave was wonderful in this crisis, visiting in prison and helping him financially on his release. For a man who was himself vulnerable… his actions must be seen as courageous."[6]

Adrian died at age 69 from a heart attack, at his and Lister's home, Smarkham Orchard, Shamley Green, near Guildford, after returning from the television studios where he had been recording Brecht's The Caucasian Chalk Circle for the BBC.[7] At his memorial service the lessons were read by Alec Guinness and Laurence Olivier and the eulogy was given by Joyce Grenfell.[8]