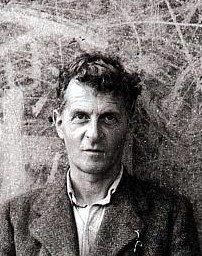 Wittgenstein was born in Vienna to a very wealthy family. He was the same age as Adolf Hitler; they both attended the same school for a while and probably knew each other. He was brought up as Catholic, lost his faith in God while at school, but later returned to Christianity. He sometimes referred to himself in later life as Jewish, having had three grandparents of Jewish descent. Three of his brothers committed suicide.

Wittgenstein studied mechanical engineering at the Technical University in Berlin, and went to Manchester University (then the Victoria University of Manchester) in 1908 to do a doctorate in aeronautics. Becoming interested in mathematical logic, he went to Cambridge to study under Bertrand Russell.

In 1912 he inherited a vast fortune from his father. He went to live by himself in Norway, so that he could investigate philosophical problems without the distractions of having other people round him. During the first World War he served in the Austro-Hungarian army, and was decorated for bravery, eventually becoming a prisoner of war. He returned to Austria physically and mentally ill, gave away his fortune to his siblings, and trained as a primary school teacher. In 1921 he published Tractatus_Logico-Philosophicus, the only major work published in his lifetime. It explores the relationship between language and logic. In 1926 his career as a schoolteacher came to an end, after he had injured a pupil by hitting him for being a slow learner. He worked for a while as a gardener, and spent many months helping to design an austere modernist house in Vienna for his sister.

In 1929 he was urged to return to Cambridge. He was awarded a PhD on the basis of the Tractatus, and became a Fellow of Trinity College.

In 1938 Austria was absorbed into the Reich and Wittgenstein thus became a German citizen, and classified as Jewish under the Nazi racial laws. He was appointed Professor of Philosophy at Cambridge, and acquired British citizenship, but volunteered to work as a hospital porter during the war. In 1947 he resigned his professorship to concentrate on writing. He spent some time in Ireland and the United States, before returning to Cambridge,where he died. He left a large quantity of writings, which were published posthumously.

(based on a Wikipedia article)

Wittgenstein never married; he is thought to have had romantic relations with both men and women. He is generally believed to have fallen in love with at least three men: David Pinsent in 1912, Francis Skinner in 1930, and Ben Richards in the late 1940s.[1] He later revealed that, as a teenager in Vienna, he had had an affair with a woman.[2] Additionally, in the 1920s Wittgenstein became infatuated with a young Swiss woman, Marguerite Respinger, modelling a sculpture of her and proposing marriage, albeit on condition that they did not have children.[3]

Wittgenstein's platonic relationship with David Pinsent (1891–1918) occurred during an intellectually formative period, and is well documented. Bertrand Russell introduced Wittgenstein to Pinsent in the summer of 1912. A mathematics undergraduate and descendant of the philosopher David Hume, Pinsent soon became Wittgenstein's closest friend.[4] The men worked together on experiments in the psychology laboratory about the role of rhythm in the appreciation of music, and Wittgenstein delivered a paper on the subject to the British Psychological Association in Cambridge in 1912. They also travelled together, including to Iceland in September 1912—the expenses paid by Wittgenstein, including first class travel, the hiring of a private train, and new clothes and spending money for Pinsent—and later to Norway. Pinsent's diaries provide valuable insights into Wittgenstein's personality - sensitive, nervous and attuned to the tiniest slight or change in mood from Pinsent.[5] In his diaries Pinsent wrote about shopping for furniture with Wittgenstein in Cambridge when the latter was given rooms in Trinity; most of what they found in the stores was not minimalist enough for Wittgenstein's aesthetics: "I went and helped him interview a lot of furniture at various shops ... It was rather amusing: he is terribly fastidious and we led the shopman a frightful dance, Vittgenstein [sic] ejaculating "No—Beastly!" to 90 percent of what he shewed us!"[6]