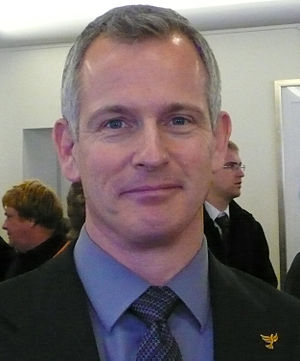 Lord Paddick
Brian Paddick, born 1958, is a British politican and former senior police officer. He is distantly related to the gay entertainer, the late Hugh Paddick.

Brian Paddick joined the Metropolitan Police in 1976, rising to the rank of Deputy Assistant Commissioner. He retired from the police in 2007. In November 2008 he was a contestant on the ITV1 reality television show I'm a Celebrity... Get Me Out of Here!

Paddick attended Sutton Grammar School, Surrey. He knew he was gay from his childhood, but was married for five years. "It was a genuine attempt to live as a straight man"[1] He now lives with Petter Belsvik, a civil engineer from Oslo, Norway. They married in Oslo, same-sex marriage in Norway being legalised 8 days before, on 9 January 2009.

Paddick was the Liberal Democrat candidate for the London mayoral election, 2008, coming third behind Boris Johnson and Ken Livingstone, and again in 2012, when he came fourth, behind the Green Party candidate.

In 2008, Paddick was ranked number 101 in the annual Pink List of influential gay and lesbian people in Britain published by The Independent on Sunday, down from number 83 in 2007. He failed to make the Pink List 2011 but was ranked 85 in the Pride Power List 2011.

In September 2013 he became a life peer, with the title Baron Paddick, of Brixton in the London Borough of Lambeth.