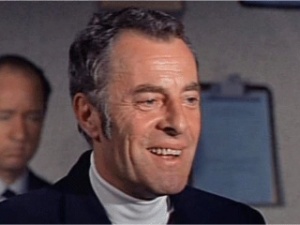 Hugh Paddick
Hugh Paddick (Hugh William Paddick, 1915–2000) was an actor, whose most notable role was in the 1960s BBC radio show Round the Horne, in sketches such as "Charles and Fiona" (as Charles) and "Julian and Sandy" (as Julian).[1][2] Both he and Kenneth Williams are largely responsible for introducing the underground language polari to the British public.[3]

Paddick also enjoyed success as Percival Browne in the original West End production of The Boy Friend, in 1954.[1][4]

He played Freddie in the 1968 film The Killing of Sister George.

Born in Hoddesdon, Hertfordshire, Paddick preferred theatre to any other form of acting and spent most of his life on the stage, from his first role while at acting school in 1937[5] until his retirement. He appeared in the original Drury Lane production of My Fair Lady. He was also an accomplished musician – singer, pianist and organist. He can be heard at the piano accompanying Julian and Sandy in a number of their sketches on both Round the Horne and The Bona World of Julian and Sandy.

In his diaries, Kenneth Williams, so often scathing of his colleagues, spoke warmly of Paddick's kindness as a man, and of his "subtlety and brilliance" as a performer.[6]

Paddick was gay[7] and lived for over thirty years with his partner Francis, whom he met at a party in London. The two men were keen gardeners at their west London home. He was distantly related to Brian Paddick, Britain's first openly gay police commander.[8]