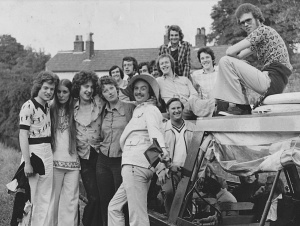 Liverpool CHE Group canal trip, 1972, Paul O’Grady third from left
Liverpool CHE Group was a CHE group in Liverpool. The actor Ralph Hallett contacted national CHE in August 1970, offering to host a group above a cake shop owned by his family. Convenorship of the group was initially shared between Hallett and Peter Norman. Other key members were Alan Swerdlow and Robin Bloxsidge.[1]

Liverpool CHE arranged a variety of social events, including a canal trip in 1972 remembered with affection by Paul O'Grady.[2]

Liverpool Youth Group and Liverpool Student Group were both spun off from the main group.

Liverpool Youth Group was spun off from Liverpool CHE Group in March 1972 because of Liverpool's age policy. The groups were re-amalgamated in February 1973 when the main group's age limit was lowered to 16.[3]