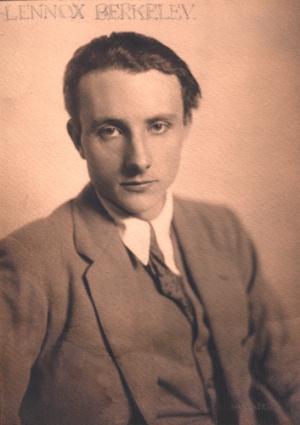 Lennox Berkely as a student
Sir Lennox Berkeley (Lennox Randal Francis Berkeley, 1903–1989) was a composer, noted for his songs and piano pieces.

He was born in Oxford and educated at the Dragon School, Oxford, Gresham's School and Merton College, Oxford. In 1936 he met Benjamin Britten, another old boy of Gresham's School, at the ISCM Festival in Barcelona. Berkeley fell in love with Britten, who appears to have been wary of entering a relationship, writing in his diary, "we have come to an agreement on that subject."[1] Nevertheless, the two composers shared a house for a year, living in the Old Mill at Snape, Suffolk, which Britten purchased in 1938. They subsequently enjoyed a long friendship and artistic association, collaborating on a number of works.

"Berkeley’s papers are, fittingly enough, held in the Britten archive in the Red House at Aldeburgh, subsumed into the story of a younger man who was for a brief time his lover, for much longer his friend, and of whom, as a musician, he was utterly in awe."[2]

Berekely was the first composer to set the poetry of his friend W H Auden.

In 1946 he marrried Freda Bernstein. Their children include the composer and broadcaster Lord Berkeley, and the photographer Nick Berkeley.