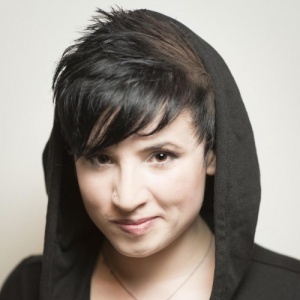 Lauire Penny
Laurie Penny (born 1986) is a columnist, blogger and author who writes for the New Statesman. She has a feminist and left wing perspective: "Socialism without feminism, after all, is no socialism worth having".[1]

Penny was born in London and grew up in Brighton.[2][3] She is of Irish, Jewish, and Maltese descent.[4][5][6] She attended the independent school Brighton College.[2] She has written about her hospitalisation at age 17 for anorexia and subsequent recovery.[7]

She studied English at Wadham College, Oxford.[8] Whilst a student she joined and performed in a burlesque troupe,[9] was a committee member[10] and appeared in amateur dramatic productions with the Oxford University Light Entertainment Society.[9]

Penny's blog, "Penny Red", was launched in 2007[11] and was shortlisted for the Orwell Prize in 2010.[12] (The name "Penny Red" refers to a Victorian stamp.) She began her career as a staff writer at One in Four magazine and then worked as a reporter and sub-editor for the socialist newspaper Morning Star. She has written columns and features for several publications,[13] and is a columnist for the New Statesman[14] and regular contributor to The Guardian.[15]

Penny is the author of Meat Market: Female Flesh Under Capitalism (Zero Books, 2011).[3] In it she mounts an attack on liberal feminism, which she characterises as embracing the consumer choice offered by capitalism as the path to female emancipation.[16]

On 26 March 2012, Penny announced via her Twitter account that she was leaving the Statesman to take up a full-time post at The Independent as a reporter and columnist.[20]

In June 2012, she clashed with historian David Starkey at the Sunday Times Festival of Education which took place at Wellington College, Berkshire,[21] accusing him of being a racist "playing xenophobia for laughs" in his statements about the Rochdale "grooming" case.

In October 2012 it was announced that she was leaving The Independent to rejoin the New Statesman (in November) as a columnist and contributing editor.[22] In the same month, The Daily Telegraph ranked Penny as the 55th most influential left winger in Britain, reporting that she is "without doubt the loudest and most controversial female voice on the radical left."[23]