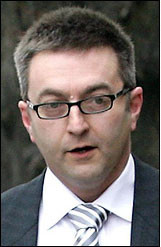 In 2006 he applied for a job as a youth worker in the Anglican diocese of Hereford. He was recommended for the job by a diocesan interview panel, and had previously worked in a similar role for another diocese. However he was interviewed by the Bishop of Hereford, the Rt Rev Anthony Priddis, who questioned him about his private life, previous relationship and sexuality. He was then informed that he had been turned down for the job.[1] Reaney took the diocese to an employment tribunal ruled that he had been discriminated against "on grounds of sexual orientation".[1]

Following the case, the Bishop received the Stonewall Bigot of the Year Award for 2007.