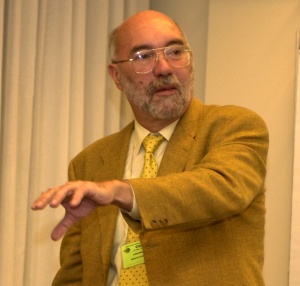 John Lanchbery was born in London and took violin lessons from the age of eight, when he started composing. A scholarship took him to the Royal Academy of Music. This was interrupted by the Second World War. He returned to studies and took part-time work with a music publisher, the Anglo Soviet Music Press.[1] They suggested that he audition for the post of conductor with the Metropolitan Ballet. He made his debut with them at Edinburgh in 1948. Two years later the orchestra collapsed for lack of funds but by then he had learned his craft. Working with choreographer Celia Franca, Lanchbery wrote The Eve of St Agnes (the story was based on John Keats' poem of the same name), one of the first commissioned ballets to be shown on BBC television.

He was taken on by Sadler's Wells company. The first professional ballet choreographed by Kenneth MacMillan was Somnambulism in 1953, with music by Stan Kenton orchestrated by Lanchbery. They also did House of Birds in 1955 (to original music by Federico Mompou). To choreography by Frederick Ashton he arranged La fille mal gardée (original music by Ferdinand Hérold and others) for the Royal Balle] in 1960. This work includes the famous Clog Dance used for many years as a theme tune for Home This Afternoon on BBC radio. Other conductors earn revenues for recordings but for Lanchbery this option barely existed. Instead his income was supplemented by the copyright he earned from his orchestral arrangements, used by ballet companies all over the world. He effectively re-wrote Ludwig Minkus's Don Quixote for Rudolf Nureyev in 1966. Arguably, Don Quixote was not a satisfactory ballet score until Lanchbery re-arranged it, although Minkus's original version has twice been recorded complete in recent years. He did the same for Natalia Makarova in Minkus's La Bayadère for the American Ballet Theatre in 1980. Boldest of all was Macmillan's Mayerling (1978) where Lanchbery arranged more than 30 pieces by Franz Liszt.

In 1970 he arranged the score for the ballet film The Tales of Beatrix Potter. His sources were many and varied, including the operas of Michael William Balfe and Arthur Sullivan.[2] He also arranged the music and conducted the orchestra for Nijinsky in 1980. His score for Evil Under the Sun (1982) is based on songs by Cole Porter and includes a memorable rendition of "You're The Top" by Diana Rigg.

Lanchbery was the first to convert operas into ballets (The Tales of Hoffmann, The Merry Widow, Die Fledermaus). He also wrote music for some British films of the 1960s, he was involved in The Turning Point, starring Mikhail Baryshnikov and Leslie Browne, and he wrote scores for two silent film classics: D W Griffith's The Birth of a Nation and John Ford's The Iron Horse.[1]

He received honours from Russia and Sweden and was awarded an OBE in 1991. He married Sadler's Wells principal Elaine Fifield in 1951. They had a daughter and divorced in 1960.[1] He became an Australian citizen in 2002, making his home in Melbourne, where he died on 27 February 2003, survived by his daughter and his companion Thomas.