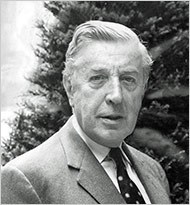 Frederick Ashton
Sir Frederick Ashton (Frederick Ashton William Mallandaine Ashton, 1904-1988), the famous choreographer, produced many great ballets, many of which are still performed. His work had a very elegant and romantic English style, though in some of his ballets he used elements based on experiences from his early life in South America. He was a great storyteller, telling the stories and creating the characters through the steps. He worked with Marie Rambert, Ninette de Valois, Margot Fontaine, Rudolf Nureyev and Robert Helpmann, as well as many composers, including Constant Lambert.

Frederick Ashton was born in Guayaquil in Ecuador, where his father was manager of a cable company as well as vice-consul. At the age of 13, he saw Anna Pavlova dance, and he was so inspired by her that he decided he wanted to be a ballet dancer. Two years later he was sent to school at Dover College, which wasn’t a happy experience, and he was later forced by his father to work in an import-export company. In 1924 his father committed suicide, and his mother returned to London to be with Frederick.

At the rather late age of 20, he began to have ballet lessons from Leonide Massine, and later Marie Rambert, and his first professional performance was in a variety show at Brighton’s Palace Pier. Although he continued to dance, he now started to create dances for musicals, operas and plays, and also produced a number of ballets for Rambert, including Capriol Suite, to music by Peter Warlock. Other successes in the 1930s were Façade, to music by William Walton, and Rio Grande, with music by Constant Lambert. In 1935 he became the resident choreographer for the Vic-Wells Ballet, which later changed its name to Sadler’s Wells Ballet. There he worked with Ninette de Valois, Robert Helpmann, but his muse was a young Margot Fonteyn, and their partnership was to last for many years. After the war the Sadler’s Wells Ballet moved to the Royal Opera House in Covent Garden, and in 1956 it became the Royal Ballet. It was there that Ashton produced his greatest ballets, many of which are still in the repertoire. These include Symphonic Variations, La Fille Mal Gardée and Cinderella, in which he and Helpmann played the Ugly Sisters. He was appointed artistic director in 1963, a post he held until 1970, when Kenneth MacMillan took over, but he continued to create pieces for the company until his death.

Frederick Ashton received many honours, including a knighthood in 1962, a Companion of Honour in 1970 and the Order of Merit in 1977, as well as the Légion d’Honneur from France and the Dannebrog from Denmark.

As a young man Ashton was bisexual, but in later years he was gay. Most of his relationships were with young men, including dancers Alexander Grant and Brian Shaw, but from 1965 he had a regular partner, 23-year-old Martyn Thomas, an interior decorator who was a rejuvenating force in his later years; he never really recovered from Martyn’s death in a car crash in 1985.

He became a good friend of the Queen Mother, and became a key member of her inner circle, which included many other prominent gay men. He amused her with his sharp wit, taught her to tango and drank martinis with her at Sandringham.

Ashton’s mother was born in Yaxley in Suffolk, where the family had a successful farm, and she was buried in the churchyard. In 1948 Frederick bought the old school house in Yaxley overlooking the graveyard, which he renamed Church Cottage. After he left the Royal Ballet in 1970 he retired to his other country house, Chandos Lodge in Eye, a few miles from Yaxley. He died at Chandos Lodge, and was buried in the graveyard of St Mary’s Yaxley, close to his mother. The simple headstone (see Burial places#Photo gallery) has a carving of a hedgehog, a reference to the film The Tales of Beatrix Potter, for which he created the choreography, and in which he danced the part of Miss Tiggy-winkle.