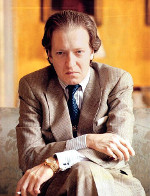 Hervey was born at Ickworth, the family seat, where he lived for much of his life. He was educated at Harrow School and the University of Neuchâtel in Switzerland.[1] He modelled himself on Oscar Wilde[2] and began to use drugs and alcohol; the Dictionary of National Biography designates him a "wastrel".[3] He inherited a million pounds when he was 16 years old, and another four million five years later.[2] He eventually acquired a personal fortune worth up to £35 million,[4]

Hervey was married for three years, despite being homosexual. He died aged 44 as a result of drug addiction, and possibly HIV.