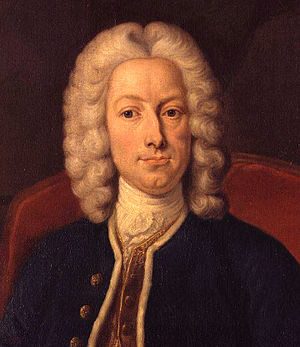 John, Lord Hervey
John Hervey, 2nd Baron Hervey (1696–1743) was a courtier and politicial writer. He was the son of the first Earl of Bristol, and took the courtesy title of Baron Hervey of Ickworth on his brother's death in 1723, but died before his father and so never became Earl of Bristol.

Hervey was born in Jermyn Street, St James's and educated at Westminster School and at Clare College, Cambridge, where he took his MA degree in 1715.[1]

He was a frequent visitor at the court of the Prince and Princess of Wales at Richmond. He may have had an affair with Caroline, and possibly also with her son Frederick, subsequently also Prince of Wales. In 1720 he married Mary Lepell, one of the princess's ladies-in-waiting, who was a great court beauty. They had eight children, and remained on good terms, despite John's infidelities.

In 1725 he was elected MP for Bury St Edmunds, but in 1733 he moved to the House of Lords under a writ of acceleration (a procedure whereby the sons of peers could be admitted under their courtesy titles).

In 1727 the Prince and Princess of Wales came to the throne as King George II and Queen Caroline. Hervey remained in touch with them.

Hervey was bisexual.[2] He was married to Mary Lepell, but he had an affair with Anne Vane, and possibly also with Lady Mary Wortley Montagu and Princess Caroline. He lived with Stephen Fox often during the decade after he followed him to Italy in 1728. He wrote passionate love letters to the Venetian philosopher Francesco Algarotti, whom he first met in 1736 when Algarotti was 24. He may have had a sexual affair with Prince Frederick before their friendship dissolved. He was in fact denounced as a sexually ambiguous figure in his time most notably by William Pulteney, then leader of the Opposition and as cited above, by Alexander Pope in his "Sporus" portrait: "Let Sporus tremble/ What that thing of silk...His wit all seesaw between that and this/Now high, now low, now master up, now miss/ And he himself one vile antithesis...". He was also attracted to Henry Fox before his affair with Stephen Fox.[3][4]

He is buried at Ickworth, where the Hervey family have a vault in the parish church.