John Hein (1957-2020) was born in Kenya. He began his work with Gay Scotland in the 1970s as a passionate campaigner for the decriminalisation of homosexuality, which led to his working with the very first Pride team. He became the chair of Pride Scotia and brought the annual Pride march and festival to Edinburgh in June every year since 1995.He was also very active in the Liberal Party in Scotland [1].Alongside his work with Pride Edinburgh he also owned Scotsgay Magazine which over the years documented and shaped the LGBT+ landscape of Scotland during the 90’s and into the 00’s. Additionally he was instrumental in the setting of Pride Saltire (East Lothian) and West Lothian Pride.

He devoted much of his time to charity work in Asperger’s, worked in the Student Union movement and was also heavily involved in the Real Ale and CAMRA movement. As well as his selfless work, John was a performer with EGMC and Loud and Proud Choirs.[2] 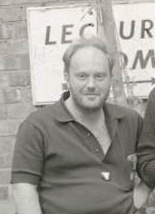