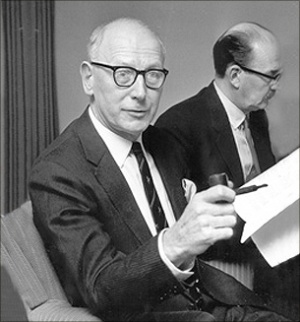 John Wolfenden
John Wolfenden (1906–1985) chaired the Wolfenden Committee that led to the decriminalisation of homosexuality in England and Wales.

John Wolfenden was born near Swindon and educated at Wakefield Grammar School and at Queen's College, Oxford, becoming a fellow of at Magdalen College.[1] He was headmaster of Uppingham School from 1934 to 1944 and Shrewsbury School in 1944.From 1950 to 1963 he was Vice Chancellor of the University of Reading.

In 1954 Wolfenden was appointed to lead a departmental committee considering the issues or homosexuality and prostitution. The committee's report, published in 1957 and known as the Wolfenden Report, recommended that sexual acts between consenting adults in private should no longer be against the law.

The story of the Wolfenden Committee was told in the 2007 BBC drama Consenting Adults, written by Julian Mitchell and starring Charles Dance (John Wolfenden) and Sean Biggerstaff (Jeremy Wolfenden).[2].