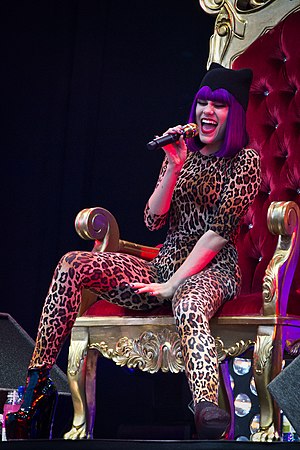 Jessie J in the The Big Chill festival, 2011
Jessica Ellen Cornish (born 27 March 1988), better known by her stage name Jessie J, is an English singer and songwriter. Born and raised in London, she studied at the BRIT School, Croydon before signing with Gut Records and striking a songwriting deal with Sony/ATV Music Publishing where she wrote for artists including Chris Brown and Miley Cyrus.

Signed with Universal, Jessie J came to prominence following the release of her debut single "Do It Like a Dude" which peaked at number two in the UK. After scoring her first number one in the UK, France, Ireland and New Zealand with the song "Price Tag", she released her debut album Who You Are (2011) which charted at number two in the UK. Other releases from the album include "Nobody's Perfect", "Who's Laughing Now" and "Who You Are" which charted within the top 20 in the UK but the release of fifth single "Domino" spawned international chart success, peaking at number 6 on the Billboard Hot 100 and becoming her second UK number one. Aside her musical career, Jessie J will be a coach and mentor on television show The Voice UK.

Jessie J is openly bisexual and stated in an interview on the "In Demand" radio show on March 3, 2011, "I've never denied it. Whoopie doo guys, yes, I've dated girls and I've dated boys – get over it."