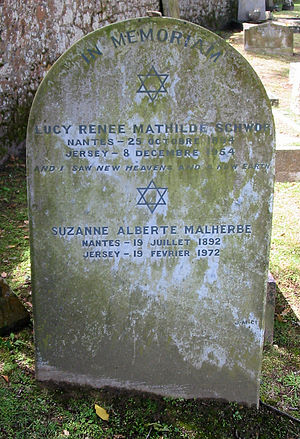 Cahun's and Malherbe's gravestone in the cemetery of St Brelade's Church, Jersey
Claude Cahun (1894–1954; née Lucy Renée Mathilde Schwob) was a French artist, photographer and writer, who lived in Jersey from 1937 onwards. Her uncle was the French Symbolist writer Marcel Schwob, who had edited Oscar Wilde's Salomé. She chose the name "Claude" as being sexually ambiguous.

During the early 20s, she settled in Paris with her life-long partner and stepsister Suzanne Malherbe. For the rest of their lives together, Cahun and Malherbe (who adopted the pseudonym "Marcel Moore") collaborated on various written works, sculptures, photomontages and collages.

In 1937 Cahun and Malherbe settled in Jersey. Following the German occupation of the Channel Islands in 1940 they both became active in the resistance. In 1944 they were arrested and sentenced to death, but the sentence was never carried out.