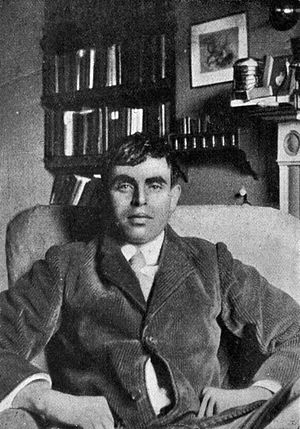 Flecker in his rooms at Cambridge
James Elroy Flecker (1884–1915) was a poet, playwright and novelist.

He was born in Lewisham and baptised Herman Elroy Flecker, but later chose to use the first name "James". He was educated at Dean Close School, Cheltenham, where his father was headmaster, and later at Uppingham School. He studied at Trinity College, Oxford, and at Gonville and Caius College, Cambridge. While at Oxford he was influenced by the last flowering of the Aesthetic movement.

He entered the consular service and went to Constantinople in 1910 and to Smyrna and Beirut in 1911. In 1911 he married a Greek woman, Helle Skiadaressi. He died of tuberculosis in 1915.

A friend, Frank Savery, remembers him as being a precocious and prolific writer, influenced particularly by Wilde's early verse and by Swinburne. In the course of his career he produced several volumes of lyrical romantic verse (some of which was included in Georgian Poetry) including The Bridge of Fire (1907), Forty-Two Poems (1911), and The Golden Journey to Samarkand (1913) and The Old Ships (1915).

Flecker also published an experimental, highly individual novel, The King of Alsander (1914). The work for which he is best remembered is the posthumously published poetic Eastern play Hassan (1922), performed in 1923 with incidental music by Delius. He also wrote the drama Don Juan.

At Oxford he had an intimate friendship with John D Beazeley, a year younger than himself, who was to become the greatest European scholar in the study of Greek vases. At the end of 1907 they spent some months together in Florence, and they were together again in Italy on summer 1908.

Flecker was bisexual, and the one who took the initiative. Little is known about their relationship, besides what Flecker wrote in his quite explicit verse:

We that were friends tonight have found
A fear, a secret, and a shame:
I am on fire with that soft sound
You make, in uttering my name.

Forgive a young and boastful man
Whom dreams delight and passion please,
And love me as great women can
Who have no children at their knees.