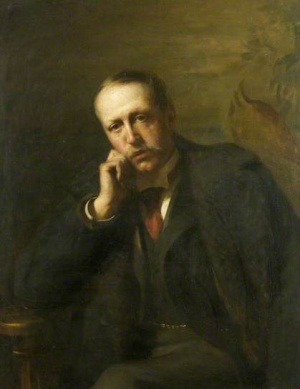 Painting of James Agg-Gardner by an uknown artist
Sir James Agg-Gardner (James Tynte Agg-Gardner, 1846–1928) was an brewery-owner and Conservative politician from Cheltenham in Gloucestershire. He was born in Cheltenham, and was MP for that constituency for four separate periods between 1874 and 1928, serving a total of 39 years in Parliament in which he made only two speeches in the House of Commons.[1]

After his father's death, he was brought up as a ward of court, and educated at Harrow School. He matriculated to Trinity College, Cambridge, but instead of starting his studies he contested the 1868 general election in Cheltenham, but failed to win the seat. He then studied law, and in 1873 he was called to the bar, but never practised law, concentrating instead on his business interests and his political career. He was a magistrate from 1875.

In the House of Commons chamber, he was a rare and poor speaker, but served for most of his career on the Commons Kitchen Committee, which he chaired from 1917. In that role, he supervised the daily tea on the terrace, and was known affectionately as the "Minister of the Interior".[1] He sponsored the bill which conferred borough status on Cheltenham, and in 1896 was made the first freeman of the borough. He also introduced bills on fire escapes (1891) and hire purchase (1928).

He was knighted in 1916,[3] and appointed a Privy Councillor in 1924.[4] By the time of his death in 1928, aged 81, he was the oldest serving Member of Parliament, having sat with ten Prime Ministers, from Disraeli to Baldwin. However, because he was not continuously an MP, he did not hold the title of Father of the House.